No matter the distance, a good story can cross it, our mission is to bring adventures directly to you, wherever you are. With new explorations constantly in development, there is always something to look forward to.

Take the time to explore.
Fresh air, sunshine, and exercise will enhance your wellness. We offer a collection of expeditions that can be enjoyed at any pace.

You’ll never have to wander alone with our experienced guides on-hand to bring a memorable adventure to you, wherever you are. Our guided tours are available for date night, family night, corporate groups, and school groups alike. Available on Zoom. Check the calendar for dates

Hiraeth (noun, m, Welsh) – A homesickness for a home to which you cannot return, a home which maybe never was; the nostalgia, the yearning, the grief for the lost places of your past.

My memory is fickle sometimes.

I remember the things people wouldn’t find important at all, and misplace things that others insist are important. I must remember.

I don’t remember visiting Philadelphia when I was around eight, but I do remember the creepy little marionette my parents bought for me tap dancing in the aisle of the tour trolley. I remember my father greeting our guide with a hearty, “Hi, Al!” after the man introduced himself.

I remember him singing Call the Wind Maria in a big, bold baritone while I sat in the back of the van smelling warm vinyl and a hint of gasoline.

I remember so much music.

And that’s how I remember Iceland.

I went on a trip with two other women to a place no one we knew had ever gone before. We arrived at Keflavík International Airport in the blue-black dark before morning, unprepared for just how cold I was about to be.

I’ve flown in and out of my fair share of cities, but I’m no Travel Master. (This trip was the first time I’ve ever actually stood on a tarmac in the snow and hauled my carry-on luggage up the steps.) I’ve seen grey, faceless airports meant only to service the commuter crowd. I’ve seen elaborate art galleries between expertly designed concourses.

But Keflavík looks like the inside of an Ikea’s dreams. It is both airy and modern, warm but aloof. And in one of the bubble windows, I saw the lyrics of a Björk song printed: 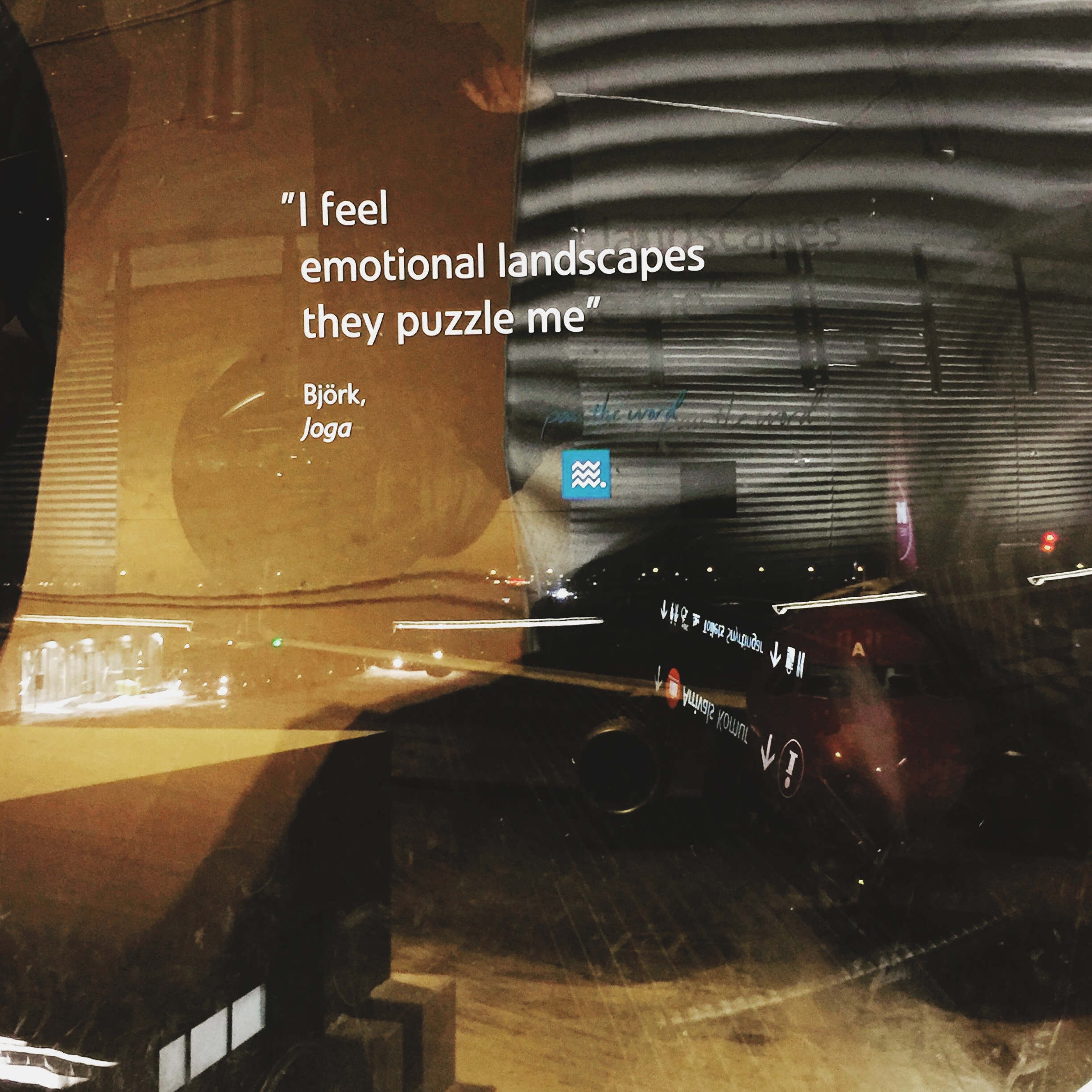 “I feel
emotional landscapes
they puzzle me”

I hadn’t really listened to Björk since I was maybe fourteen years old, seething and frustrated and listening to Army of Me over and over.

Things are a little different now.

We arrived just in time for New Year’s Eve, when the locals began to detonate more fireworks than I have ever seen in my life. We watched them from the balcony of our AirBnB for a little while, the TV on in the background.

We managed to tune in to a circus performance, and when the aerial silks came on, I sat down to pay attention. The music struck something in me, and when I looked it up, I realized that it was Björk’s Joga, a song about the incredible importance of close personal relationships.

To me, my friends are everything. They’ve waited patiently with me while the worst times of my life have bowled me over, and helped to dust me off.

I watched the performers spin in a tight spiral before returning to each other’s arms and I really listened to what this song was saying. The window missed the context:

All these accidents that happen
follow the dot.
Coincidence makes sense
only with you.
You don’t have to speak,
I feel

Emotional landscapes
they puzzle me.
The riddle gets solved,
and you push me up to

I listened to the song over and over, committing to my memory, like I could sear it straight into my heart. I wanted to hear it in my head always. There are a few songs in life that stay with us like that.

They open up a searing cool cavity in our chests and bellies, almost like the gaping arches of a cathedral, big and full of sound and light.

There are a few songs that we hold on to like those teenagers, desperate to hold on to their favorite songs, feeling their lives take shape and form, their tastes first begin to develop. They tie songs to memory, heartbreak, hope, and helpless longing. 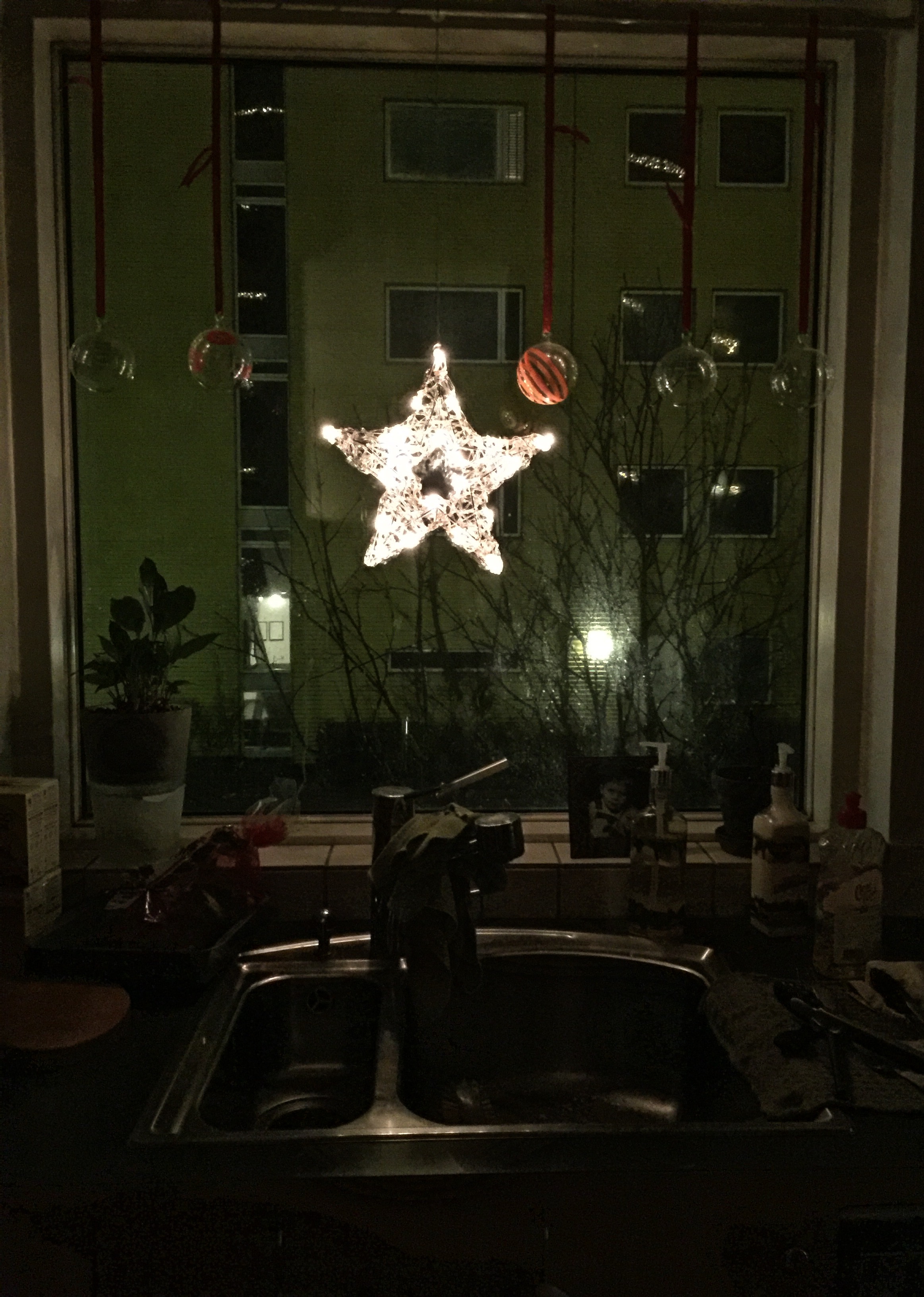 Like a grade school poem—once you memorize it, you’ll never forget it. Whether or not you want to.

So I sat in the little kitchen in the apartment where we were staying, in the dead black of late night, and I brushed my teeth in the light of a Christmas star, looking out at the snow.

I felt warm, and safe, and impossibly new.

I ignored my own fears and anxieties, and I dove into exploring a place so unlike anywhere I had ever been. I puzzled out bus stops that got tangled up in my mouth, and tried on thirty five pounds of chainmail.

I made a long trip out to the countryside, where they sell fresh wool fiber and beautiful sweaters, and I stood by the brook while what little sunlight we would have would fade away.

And I didn’t feel sad at all.

Is there a song that brings back memories for you? A place you think back of fondly, and wish you could return to, even for a few moments?

This week, our Instagram featured a post created by LittleBaliLove, an account bursting with beautiful, colorful photos of very good reasons to take your kids with you on that dream vacation to Bali.

I’m convinced, and I don’t have kids.

The truth is, kids may not remember all of the fantastic details of the trip you take, but travel changes them just the same. It leaves a mark.

My parents took me with them on trips before I was old enough to ask, “Are we there yet?” and I’ll admit, it took me a while to appreciate them. In fact, I kicked up my fair share of fuss.

I remember being maybe fifteen years old, set up in the back of our car with a Gamecube and a mini tv my dad rigged between the front seats for the sake of blessed quiet. He stopped the car in the middle of the Redwoods in Oregon, and he and my mother urged me to get out and appreciate the wonder of nature.

There is a photo somewhere in our albums of me leaning out of the car, still plugged in, to look up at the trees before going back to my teenagerdom.

But there’s also a photo of me at ten years old, cocking my head curiously at my father while he made a funny face back. The street signs in the background are written in French, because we’re mugging at each other in Paris. I am in one of the foremost fashion havens of the world wearing neon bike shorts and an awkward mop that only a child can pull off, and my father is scrunching up his face like a lunatic while my mother fumbles with the camera.

My father is the reason I ever put my hands on a camera. He was always taking pictures, though he was rarely in them—which is why I will always ask other groups if they’d like their photo taken so they can all be in it.

I remember this about Paris:

But I took photos of the lamp-lit avenues, and developed an appreciation for photography. I would not leave my father alone if a single leaf caught my eye. I wanted to show people why things familiar and unfamiliar were beautiful.

We developed photos of graffiti, of irritated birds, and of total strangers, forming blurry lines as they walked right past.

Some things were strange to me, but they photographed just as well, and they became part of my understanding of the world. It’s the same way for everyone—the unfamiliar becomes familiar when you travel and experience it. It loses the edge that makes so many things scary.

I kept taking pictures. I learned to ask, in a few different languages, “May I take your photo?”

The answer was not always yes, and that was okay.

I learned new words, if not entire languages, and understood that though each culture was different, its people were the same. They smiled the same, laughed the same, and posed the same.

They were different, just like I was different, but we were both good—maybe a little better, now that we’d met.

When you travel with children, you open a gate to more than just a planned experience.

You teach them to be adaptable, unafraid of change and eager for adventure. Children who go camping will learn to sleep anywhere, children who experience delays at the airport—while prone to some whining—will learn to be patient, and (hopefully) kind to harried airline employees.

Children who travel learn to socialize not just within regimented school hours, or within their own age groups, but with people from different cultures and eras. They become comfortable not with strangers, exactly, but in the knowledge that strangers can be friends.

They become more sympathetic to others, more eager to be a better person, a more interesting person. They create stories to tell over and over, their tongues quick and peppered with new words and wonders.

Children who experience new cultures and languages absorb and appreciate them, ask questions about them, learn them. They become more likely to master new languages and understand differences without fear or aggravation. This is a story they want to be part of.

This is something new.

You could leave your children at home. Sometimes, you may honestly need to.

But never be afraid to take them along.

You don’t want to miss out on something amazing.

“Tell me and I forget, teach me and I may remember, involve me and I learn.” — Benjamin Franklin

“It seems that the more places I see and experience, the bigger I realize the world to be. The more I become aware of, the more I realize how relatively little I know of it, how many places I have still to go, how much more there is to learn. Maybe that’s enlightenment enough – to know that there is no final resting place of the mind, no moment of smug clarity. Perhaps wisdom, at least for me, means realizing how small I am, and unwise, and how far I have yet to go.” —  Anthony Bourdain 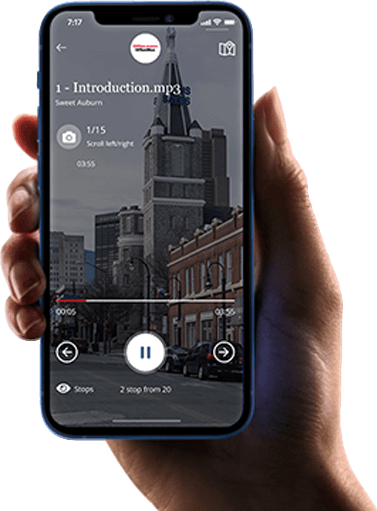 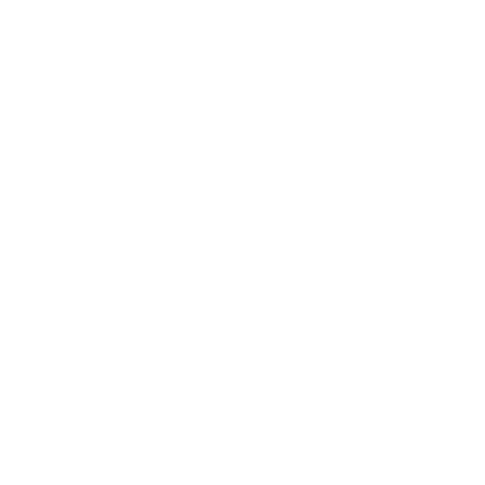